The Liquid Legacy of Louis Lucas

In 1970, when Louis Lucas left his table grape-growing family in California’s hot Central Valley to try his hand at wine grapes in comparably cool Santa Barbara County, the 28-year-old Notre Dame graduate found himself staring at a blank canvas. Years before, a UC-Davis study determined that the Santa Maria and Santa Ynez valleys might be suitable as wine regions, but only one commercial vineyard existed at that point: the Nielson Vineyard, planted in 1964 by two other Central Valley table grape/raisin guys, Uriel Nielson and Bill DeMattei, who also happened to be Lucas’s little-league coach. With just a couple vintages from only one vineyard to examine, no one knew what grapes worked where. “When we first got here,” recalled Lucas last week, in the midst of his 42nd Santa Barbara harvest, “the question was, ‘What to grow?’”

With only the needs of dominant Napa Valley wineries as guidance, Lucas (whose first name is pronounced “Louie”) and his brother George planted a patchwork of grape varieties on 800 acres near the Santa Maria River, named it the Tepusquet Vineyard in an ode to the old Spanish rancho once there, and waited to see what happened. “We discovered that chardonnay and riesling were outstanding,” said Lucas, “and the pinot noir was exceptionally good, too.” The fruit was then all shipped north to be turned into wine — or what passed for wine, at least, in that much of the pinot wound up in something called “Eye of the Swan,” a sweeter blush made by Sebastiani. Lamented Lucas, “That’s what we were doing with pinot in those days.”

Lucas managed to turn important heads with Tepusquet’s white wines, including a young Jim Fiolek, who was the head of the Santa Barbara County Vintners’ Association until earlier this year. Back then, Fiolek was working at Brinks Vintage Shop in La Cumbre Plaza, where Lucas would sometimes shop for bottles from around the world. Fiolek distinctly recalls a 1975 Tepusquet Vineyard chardonnay produced by Napa’s renowned ZD Winery. “It was better than anything coming out of anywhere,” said Fiolek. “That was a huge turnaround for me.” For Fiolek and many others, Lucas — who also advised the founders of Bien Nacido Vineyards and oversaw the original Kendall-Jackson plantings — was one of the first to show off the region’s potential for serious wines. Said Fiolek, “He’s certainly one of the pioneers in Santa Barbara County.”

Today, thanks to the dogged and determined experimentation of Lucas and other pioneers of the early 1970s, the Santa Maria Valley and Sta. Rita Hills at the western edge of the Santa Ynez Valley are both internationally renowned for pinot and chardonnay; and the rest of Santa Barbara wine country, from the hills of Los Alamos to the gorges of Happy Canyon, is excelling at most everything else, from syrah, grenache, and other Rhone varietals to Italian grapes like nebbiolo and sangiovese. That even includes Bordeaux varietals like cabernet sauvignon, the grape that initially caught Santa Barbara a bad rap for red wines because it couldn’t get ripe enough at Tepusquet and other cool-climate vineyards, resulting in overly herbaceous, vegetal wines. That, too, was Lucas’s fault. “I gained everyone the reputation we have for cab here,” said Lucas, who eventually lost the Tepusquet Vineyard (currently owned by Cambria Winery) but acquired other properties along the way. “Now I am trying to go the other way.”

A critical turning point in that shift was in 1996 when Lucas teamed up with his longtime friend, his occasional attorney, and retired Superior Court judge, Royce Lewellen. “In the 1990s, there were a lot of Napa people coming down here to buy vineyards,” said Lewellen, who’d been supporting Santa Barbara wine country since it began. “I kept telling Louis not to sell to those alligators.” Instead, Lewellen partnered with Lucas to form Lucas & Lewellen Vineyards, which today farms about 400 acres in three distinct regions: the Goodchild, High 9, and Old Adobe vineyards on Foxen Canyon Road in the Santa Maria Valley; the Los Alamos Vineyard, easily visible alongside Highway 101 just south of Los Alamos; and the Valley View Vineyard, in the heart of the Santa Ynez Valley on a prominent hillside overlooking the river, just east of Solvang.

But the partnership wasn’t just about growing grapes: The first vintage of Lucas & Lewellen wine was released in 1999, which meant that, after more than a quarter century of just growing the grapes, Louis Lucas was suddenly in the winemaking business, too. Did that impact his vineyard work? “Yes!” replied Lucas with no hesitation. “I really get a chance to see how each parcel of our vineyard does. I can make adjustments on the vines to make our wine that much better.”

That ground-to-glass ethos is a common refrain in the wine business these days, though usually its winemakers eventually grow closer to the vines, not the other way around. But Lucas’s grower-first, vintner-second pedigree is also what makes a visit to Lucas & Lewellen’s tasting room in Solvang such an eclectic treat: His constant quest to keep answering what grows best where means that they grow and produce more than two dozen different grape varieties, including a number of Italian wines that are served under the Toccata label, whose tasting room is just down the street.

Altogether, the winery uses just more than half of the fruit that it grows to produce more than 30,000 cases a year under its three labels: Lucas & Lewellen, Toccata, and Queen of Hearts, a bargain brand. Some of the remaining fruit is sold to other California wineries, but Lucas & Lewellen’s facility at the end of Easy Street in Buellton also handles a good deal more of it, processing it to be sold to “bona fide wineries” around North America, with clients in Ohio, Texas, Arizona, Colorado, Wisconsin, Illinois, and Canada, where it gets delivered as a block of frozen, alcohol-free grape juice. “I don’t like the four-letter word ‘bulk,’” said Lucas, who sends the shipments in 275-gallon plastic bags housed in a cardboard frame. “We’re selling specialty wines.” That also includes a line of wine for Mission Santa Barbara (sold in the gift shop) and occasional celebrity brands, like the current pinot noir for Jane Seymour.

In charge of the winery is Cal Poly-trained soil scientist Megan McGrath Gates, who briefly apprenticed under the project’s first winemaker, Dan Gehrs, but took over as top dog seven years ago. She shares an enthusiastic, exploratory spirit with Lucas, and the two can finish each other’s sentences. “You give into the process and let the grapes guide you,” said Gates, to which Lucas added, “Let them be what they want to be.” And like Lucas, she smiles at the challenge of so many varietals. “It’s like climbing a mountain,” she explained. “One step after another, and you don’t look back.”

That’s pretty much how Lucas has done it since 1970, and the key for Lucas & Lewellen Vineyards will be to keep that energy alive. “Louis is the driving force behind our business,” said Mike Lewellen, Royce’s son who began managing the operation almost five years ago, after 16 years at Territory Ahead in Santa Barbara. “His experience and background leads us to what we do.” 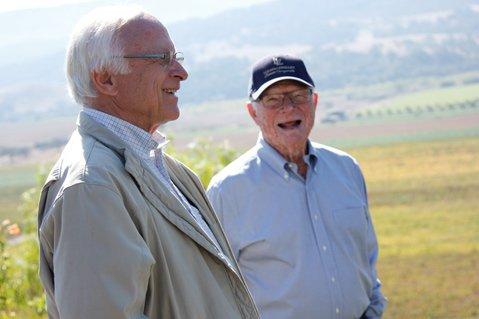