"We had one dog adopted and two kittens. Hurray!" Grossheider said. The dollar amount raised from the Oct. 21 Wine, Wash & Wag event is still being calculated.

Wine, Wash & Wag spread out around the downtown village of Solvang. It was the brainchild of Lucas & Lewellen events manager Anjie Parker and Pam Koga, owner/operator of Pam's Pampered Pooches mobile grooming.

"Pam came over to do my dog — he's a rescue named Angus — and her truck was parked outside the tasting room for a long time," said Parker, whose husband, Andy Moore, is the tasting room manager and frequently photographs dogs visiting their Copenhagen Drive location. "A customer came in and asked if we were doing grooming. Pam and I almost instantly thought of 'wine and wash' as a fundraiser for the Humane Society and thought we'd give it a try."

With Grossheider happily on board, organizers pulled together several of Solvang's dog-friendly tasting rooms as well as three local mobile groomers, with all donating a percentage of their sales that day to the Humane Society.

There was a drop-off location for desperately needed blankets and towels. Makeshift pens with dogs and cats available for adoption were set up. Dogs wearing "adopt me" signs were walked around the village by Humane Society volunteers, including Lois Craig and Bonnie Pieper, who paraded down Copenhagen Drive with Chihuahua mixes, Harley and Dolly.

The SYV Humane Society, with its shelter in Buellton, has a "100-percent live release rate," Grossheider said. That means every animal that comes in goes out to a new home. The shelter placed 225 animals in 2014. Three hundred animals have already been placed in 2015.

A not atypical backstory to one of the potential adoptees was that of a Chihuahua mix by the name of Chorizo. She was one of 10 dogs in a local home. The owner contacted the Humane Society asking for some assistance with training issues. He was clearly overwhelmed, explained the Humane Society's Amanda Weston. They convinced him to keep only his three adult dogs and have them spayed or neutered, and to turn over the seven babies — including Chorizo — for adoption.

Leonora and Joe Rovtar had their Dogs Unlimited mobile grooming truck set up in front of the Olive House on Mission Drive. In addition to donating a percentage of any grooming fees, they offered free nail trimming. Happy customers were gladly dropping $10 or $20 into the Humane Society donation jar for the convenience.

One customer was even a Humane Society board member. Helen Bundgen brought her adopted German shepherd, Heidi, to the Rovtars for a quick pedicure.

The Humane Society makes sure that all the animals it places are current on vaccines, are spayed or neutered, dewormed and flea treated.

"Our goal is to get them in new homes as quickly as possible," Grossheider said.

Dog lover and mobile groomer Pam Koga is all in favor of that. As she washed and dried her first two customers — both rescues — the Pam's Pampered Pooches owner related that she's a former dental technician.

"This," she said while blow-drying one of the canines, "is so much more fun."

For more information on the Santa Ynez Valley Humane Society and the animals available for adoption, call 688-8224 or visit www.syvhumane.org. 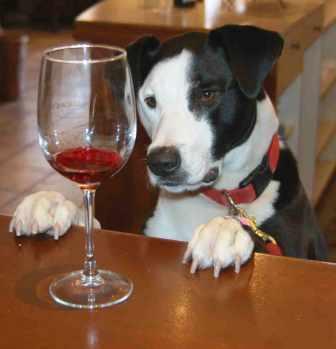