Marketing pro Liz Dodder gets a sparkle in her eye when she talks about the Central California wineries that make bubbly.  “Bubbles are my favorite,” she says with enthusiasm, “and I was always keeping a personal list of who was making it.”  That led her, in 2014, to produce a Central Coast sparkling wine map for her popular blog, Cali Coast Wine Country.  There were 45 stops on that map, already a testament to a burgeoning industry.

But something remarkable happened when she updated her map for release last month: the number of San Luis Obispo and Santa Barbara County sparkling wine makers now tops 70.

“And the percentage is much higher in Santa Barbara,” she says.  “With somewhere between 100 and 150 wineries, 40 are making sparkling wine here.” In SLO County, 30 out of more than 300 wineries make bubbly on an annual basis.

No matter how the numbers fall, it’s clear that California’s Central Coast has quickly become a hotbed of effervescence.  Much of that is driven by the creative juices of the winemakers themselves.  “They have a love for doing this,” Ms. Dodder says.

And certainly, making sparklers takes the mechanics of winemaking to another level.  “It takes several years to do it right, and a lot of effort,” she says.  “And when you add up what goes into each bottle – add up all the man hours and time – the prices they sell for doesn’t even cover it.”

In Santa Barbara County -- where pinot and chardonnay, Champagne's main ingredients, flourish -- many of the top tier producers sell their bubbles from about $20 to $50 a bottle, with a few commanding prices above $60.  Many of them, like Lucas & Lewellen, produce the still wine locally and then truck the juice to an outside facility – a place called Rack & Riddle in Napa, mostly – to be further fermented into bubbly.  But a growing number, including Flying Goat Cellars and Fess Parker Winery, produce their sparklers entirely in-house, emulating Champagne’s classic methode traditionelle.

Winemaker Dave Potter is among them.  He appears on Ms. Dodder’s new map three times, actually: his upscale Potek label, which produces a Blanc de Blancs and a Blanc de Noirs ($60), pops up in Santa Barbara’s eastside while his Municipal Winemakers brand, which makes an “Aussie-style” sparkling syrah ($45), appears with tasting rooms in both Los Alamos and Santa Barbara’s Funk Zone.

“Everybody loves it,” says Mr. Potter of his Muni sparkly.  “We blow it out – we sell it out in just one email.”

The fun associated with bubbles makes producing them tempting, according to Ms. Dodder, because it allows wineries to cast a wider net.  “It gives them something new” to put on their portfolio, she says, “and allows them to extend their brand.”

Winemaker Megan McGrath Gates, who produces 1200 cases of four unique bottlings a year Lucas& Lewellen, agrees.  “Our distributors have placed these wines nationwide and they are poured by the glass in many restaurants,” she says.  “Our sparkling wine program has become emblematic of the variety and quality of wines that can be produced in Santa Barbara County wine country.”

Ms. Dodder has several personal favorites on the map, like Buellton’s Mosby Winery, whose prosecco-style Stelline de Cortese for $20 “is one of the great bargains” in Santa Barbara.  She also likes the sparkling Vermentino at Tessa Marie Wines in Los Olivos and the sparkling wine-by-the-glass at Drake Wines in the Funk Zone – chardonnay that’s carbonated to order.

Ms. Dodder produced 5000 copies of the Santa Barbara and San Luis Obispo Sparkling Wine Maps, available for free at each of the wineries they feature and at the offices of several local visitors’ groups.  You can also download the maps off Liz Dodder’s blog.

And proof that this trend continues to fizz: at least four wineries have begun producing bubbly since the maps went to print, including Kalyra’s new sister label, Helix, and the new Lou Bud brand from Sanford assistant winemaker Laura Roach. 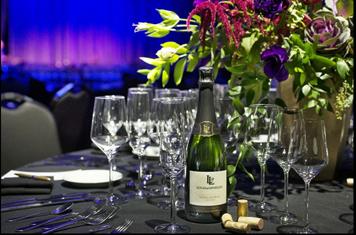