Gathering for a Historic Photograph

Members of the new Los Olivos District AVA gathered for a historic photograph on January 26.

Forty of the Central Coast's most prominent winemakers,winery and vineyard owners gathered on the grounds of The Old Mission Santa Ines on Jan. 26 to celebrate the formation of the Los Olivos

In approving the petition for LOD, the U.S. Treasury Department's Alcohol and Tobacco Tax and Trade Bureau (TTB) noted that there are currently "12 bonded wineries and 47 commercially producing vineyards covering a total of 1,120 acres within the proposed AVA, " with "topography, soils and climate" being the distinguishing features.

The AVA designation is effective as of Feb. 22, and questions about labeing dominated the conversation at the photo gathering.

Beckmen Vineyard owner Steve Beckmen wondered whether he could put Los Olivos District AVE on the labels of wines from previous harvests. He has a particular 2014 vintage in mind. Fred Brander was struggling with question about whether wineries can redesign labels now or can't even start the process until Feb. 22.

Where the grapes are grown is the issue for an AVA designation, not where the wine is actually produced.

Dick Dore's Foxen Winery is in the Santa Maria Valley. He was on scene because the Williamson-Dore Vineyard he co-owns with wife Jenny Williamson Dore, is in the new AVA and supplies fruit to Foxen.

Drake Whitcraft makes his Whitcraft Winery wines in Santa Barbara. C-5 is one of the vineyards from which he sources fruit. C-5, owned by Matt Christ and his family (owners of Cinque Stelle Winery) is in the LOD. That put both Whitcraft and Christ in the picture.

Similarly, Bob Lindquist makes his Qupe wines at a facility off Tepusquet Canyon Road in Santa Maria. He was there for the picture because some of the fruit he purchases for his wines comes from the Ibarra-Young Vineyard which sits in the heart of the Santa Ynez Valley and within the boundaries of the LOD.

According to the TTB ruling, any wine labeled with an AVA must have at least 85 percent of the wine derived from grapes grown within the area represented by that name. 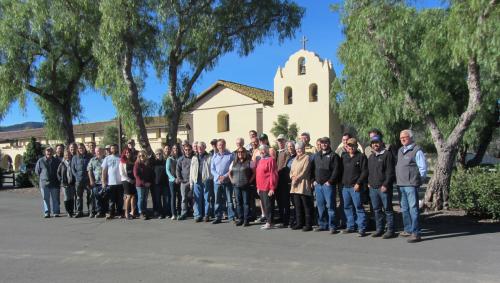 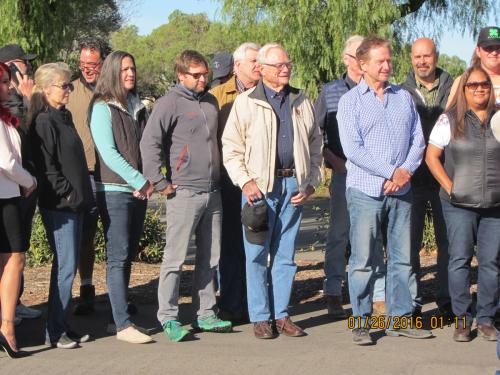