April showers bring May flowers, but where are the showers? Last year we had seven inches of rain in April. This year we had none in March or April and it doesn’t look like we have any more coming. Grapes are not big users of water but they do need it. Vegetables and berries use much more water than a vineyard.

Recent news informed us of a huge frost event in Europe resulting in a devastating loss of billions of dollars in grapes. We constantly monitor our temperatures this time of year. We have had a few close calls but so far we haven’t had a problem. What makes it difficult is that we use water to protect against frost. We used to have a six day supply of water for protection but now we have less than two days worth of water available.

The grapes have broken bud and are growing. Some vines are already out at least six inches. We have started shoot removal, which is removing shoots, or “suckers”, that are on the old wood. They usually do not have grapes and take energy away from the plant so removing them adds to the plant’s vigor and the ease of manipulating the canopy.

2018 Chardonnay, Goodchild Vineyard: This wine is influenced by oak, but not a lot of oak. What comes through is the crispness of the cool weather Santa Maria vineyard where you get higher acid and lower pH. This is a fresh and invigorating style of Chardonnay, a little different than what you are used to in a usual California Chardonnay, but this is a great representation of Santa Maria’s terroir.

2017 Cabernet Sauvignon, Valley View: When we acquired the Valley View Vineyard, I never thought that the Cabernet could be this good. This wine met our original goal of making a Cabernet that included all five varieties of Bordeaux. I would rank this wine among the best vintages of Valley View Cabernet that we have ever made. It reminds me a little bit of our “Clone 6”, which has been the ultimate Cabernet grape. It exemplifies the best of Cabernet with some added complexity from the other varieties. Stock up on this one to enjoy now and cellar for later. It will only get better and is a steal at this price.

2017 Malbec: I had a recent visitor from Napa who was impressed that we make a Malbec. And then he was more impressed by how well our Malbec exemplifies a variety that is often overlooked in California. This wine is big and bold but soft, and it has great color. It wants to overcrop a little so we control the size of the crop. Malbec grapes take a long while to mature and they require a little patience in the vineyard. The Malbec variety adds color and softness to our “Hidden Asset” blend, which we have featured for you Reds Only members this month. This Malbec vintage is very drinkable now but it is big and would benefit from some additional time in the bottle. I get a little bit of tannin in the finish but it is very good.

It is nice to almost be free again. I have been a masked bandit for too long. Enjoy the summer and lots of sun - it’s loaded with Vitamin D. Pay us a visit! 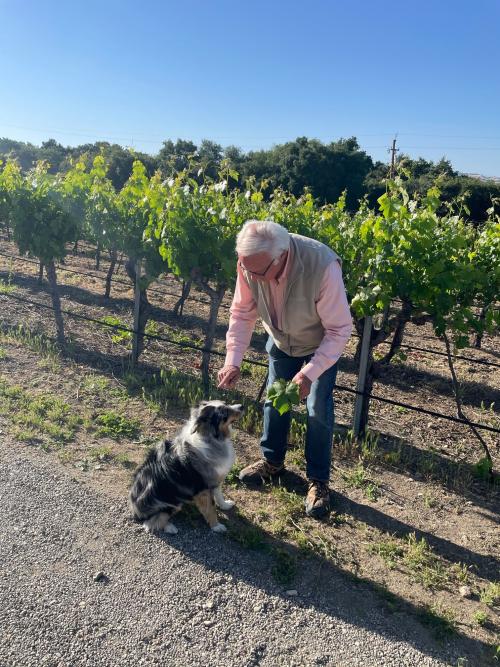