It’s another early growing season, similar to last year in that regard, but this year we have a lot more growth in the vines in almost all varieties. I think the cause is that we had cooler nights earlier and the rains were spread out evenly over a period of time. Rain water is of higher quality than well or district water.

Our work load in the vineyard is much more than last year. With this increased amount of growth, this is the time that we remove unwanted shoots and shape the canopy. Increased foliage also causes us to be much more aware of potential mildew. I expect us to be picking grapes by early August.

We are still living under drought conditions. Our wells continue to produce at about a 50% level, which is nearly adequate for irrigation. Our water district for the Valley View Vineyard originally scheduled for 5% state water, then raised their estimate to 45%, and then raised it again last week to 60%. Conditions in northern California have greatly improved the availability of state water.

2014 Gewürztraminer: We have 4 acres of this variety and each year I threaten to take the chainsaw and make it Pinot, but then I taste the quality of the distinct floral spicy fruit and I change my mind. When this variety ripens properly, as it does on our vines, it turns an orange pink color and that’s what enhances the flavors. Many vineyards have trouble getting proper ripening to take place and so I’ve been reluctant to graft out the variety. We have a couple of wineries who use our grapes and several who buy our wine in bulk, but they don’t care to be mentioned by name! Our 2014 is off-dry, delicious, and should be called “A Touch of Spice” - beats the heck out of “Gewürztraminer”!

2013 Malbec: One of my favorite grapes and definitely one of my favorite wines. Our 2012, winner of the Gold Medal at the Long Beach Gran Cru, was an absolute hit with our Tasting Room and Club members. Believe it or not, we put away some of the 2012 and have scheduled those last 30 cases for a public re-release. In the meantime, we’ve released the 2013. It has great color with a little higher alcohol, and it’s a bit of a bigger wine. Case production was limited to 286 cases. The 2013 needs a little more time in the bottle as it still shows big tannins on the finish. Drink this one now and acquire a few more to put away for a year or two. It’s good right now but it has even more potential with time. Malbec is always on the top seller list in our Tasting Room.

I can’t believe that summer is near. The grapes are blooming. Don’t forget the Summer BBQ and the August Vineyard Tour - come see us! 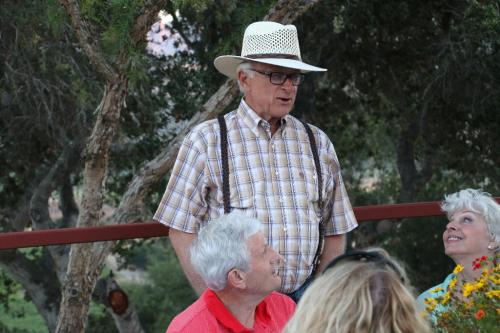