We are well into the first quarter of 2017. Our goal to finish pruning is approaching in a few days and it looks like we are going to make it, but we did have some interruptions. Let’s call it rain! All three of our vineyards have received over 20 inches of precipitation. Normal for us is 12-15 inches. As a result, the creeks and rivers have run for the first time in several years. Of course, I would like to have them running even more, but what has happened has made a large impact on what was drought. As a grower of grapes, I am as concerned with too little rain as I am with too much rain. Right now things look pretty good. We definitely had enough rain in the vineyards to establish a real good base of water underneath the vines. Accumulated salts have been either dissolved or flushed away, which helps the nutrition of the vine. We will probably be able to grow the crop with much less water. My one main concern from all of this is that during the flowering period, we don’t have too much water in the soil profile because that affects the fruit set. We are very thankful for the rains received. The original forecast was for a quite dry winter. Our area is still considered to be one of the few slightly drought stricken areas, but the improvement has been remarkable.

Rosé de Santa Barbara: To me, a surprise wine! Our original intentions were to make a rosé similar to our previous vintage but crop conditions in 2015 altered our plans. 2015 was one of the smallest crops that we’ve had in the past 45 years and, in many cases, we were unable to deliver the total amount of grapes contracted to our grape customers. We shorted ourselves drastically in Pinot Noir so this one was made with 60% Pinot Noir Rosé with an addition of 8% Viognier, like we did in 2014. To complete the Rosé we added 30% Malbec Rosé. We didn’t expect to be able to bottle the Malbec Rosé but because we were short in Pinot, and because it was very good, we included it. It was made from young Los Alamos vines in the saignée method.  That is, free run Malbec juice was taken from just crushed grapes after a short soaking, leaving the Malbec wine more intense. This became our Malbec Rosé! It has a little more color - blame the Malbec! It is rich and very flavorful, reserved for Tasting Room and Wine Club only. Serve chilled with fried, spicy, and salty food.

Cabernet Franc: In the past, our Cabernet Franc has come primarily from the Valley View Vineyard. It’s a variety that also does well in some of the cooler districts and has been one of the few vinifera varieties successfully grown in the south and east coast. It tends to be hardy and can handle some moisture when on the vine. This wine is a blend of fruit from the Valley View and Los Alamos vineyards. Valley View is almost 3 acres and at Los Alamos, we call it Reservoir Cabernet Franc because it’s adjacent to a reservoir, like an acre and 3/4, and on an elaborate trellis system. We like them both because they’re true to varietal character. The wine has that rustic, dry leaf flavor and shows the distinction of Cabernet Franc in its pungent nose and spice and smoke character. Serve with a pork roast or ham at Easter time and it’s very complimentary to pasta.

I’ve been studying up on the Rhône region of France. It seems Andy and Anjie got me into doing a Rhône River cruise and I’m playing host to 180 guests. Can you imagine what these people are going to be exposed to? The spring Vintners’ Festival is coming in the latter part of April. I will be back just in time from the Rhône trip, a bit jet lagged, but ready to enjoy the Lucas & Lewellen Vintners’ Festival Winemaker Dinner with you. 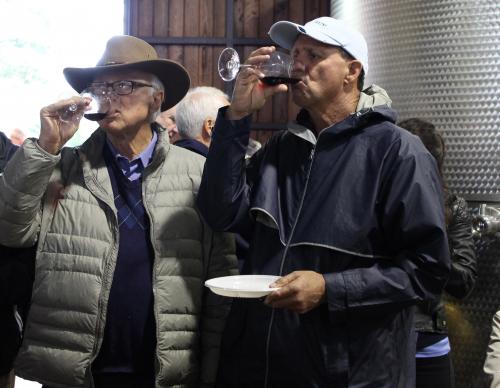