'Hello again! My name is Clayton Fox and I wrote about Frog's Leap last year and the inimitable John Williams. I recently left my position in sales at Winebow to focus more on writing and I really enjoyed working on this piece about Julia's Vineyard, Louis Lucas, and Lane Tanner.' See our WWC21 guide for more old-vine competition entries.

Before leaving California for Chicago, I wanted to see the vines one more time. And I wanted to see old vines. Some legacy to take with me. Something that would show me what California was and where it was going. My former colleague Will Henry—owner of Lumen Winery in Santa Maria—suggested I come up and take a look at Julia’s Vineyard, an old vine section of the larger Cambria Vineyard, and probably the oldest ungrafted Pinot Noir vineyard in Santa Barbara County.

The vines were originally planted in 1970 by Louis Lucas, a self-proclaimed “misplaced table grape grower” from the Central Valley. His grandparents were Croatian immigrants and his father was a table grape grower. He used to send Louis out East to see how the grapes held up because he wanted perfection that could travel, and this perfectionism was imparted to Louis. He wants his vines perfect, his bunches perfect, his grapes healthy.

In 1970 Louis headed south to Santa Barbara to see if there was a good place to plant a vineyard, to get into the wine grape business. At the time, there were no wineries in Santa Barbara and only about 80 acres planted to vine. According to Louis, what would later become Rancho Sisquoc Winery was there but was, “a few vines. The ranch foreman was a super guy. He made some wine out of it. He had a plastic garbage can and a Louisville Slugger.” And there was the Nielson Vineyard, planted in 1964 by Uriel Nielson and Bill DeMattei, two other Central Valley table grape growers. So the big question was still open, could the area could produce great wine grapes?

To get a feel for the land, Louis says, “We looked in people’s back yards. People had grape vines growing in their back yards. One of the ladies, she was a spinster, Dorothy Jensen, had the Jensen ranch, and she had some grapes in her yard. And that was an indicator that damn sure you could do grapes. And then soil tests, and weather tests and weather data.” So Louis and his brother planted 800 acres in the Tepusquet Rancho. The vineyard became known as Tepusquet and it turned out better than anyone could have hoped. The site was amazing.

Louis still has a letter from the late great Dr. Albert J. Winkler of Davis who came to see the vineyard in 1972 and wrote, “I could hardly believe what I saw at Tepusquet Vineyard Friday. It is the most outstanding one-year-old vineyard I have ever seen.” And then they were off to the races. “ZD Winery made a Chardonnay from us that shook the world and so did Chateau Montelena, Mike Grgich made a couple wines from us. I sold him Chardonnay for 15 years.” These Napa wineries were making outstanding stuff from Louis’ grapes and it started a revolution. Louis put in Riverbench Vineyard nearby in 1973, and of course we know about Sanford and Benedict coming in 1971.

Julia’s Vineyard was so named in 1987 when the famed Jackson family bought Tepusquet from Louis and renamed it Cambria, and named a particular area of Pinot Noir after their daughter Julia. That area, or at least a significant portion of it, has never been replanted and according to Louis, was ungrafted from the beginning. The Jacksons put the fruit into their Cambria label until 1995-96 when the matriarch, Barbara Banke, and Lane, were at a charity event in Atlanta. They went out shopping and Lane talked Banke into letting her buy some fruit from Julia’s for her winery. According to Lane, Dick Doré of Foxen, who she was living with at that time, will tell you Jess Jackson approved his request first. It’s a he said, she said. Either way it turned into something bigger when Lane and Banke thought up a project to invite more notable winemakers in to create their own interpretations—something that continues to this day and is perhaps one reason the old vines haven’t been pulled.

When I arrived up in Santa Maria, I didn’t go straight to the vineyard. I went to Will Henry’s gorgeous hilltop home just east of Orcutt and sat down with Will, Louis, and Will’s partner at Lumen, winemaker Lane Tanner (pictured above with Louis). Lane is a legend in her own right, the “Czarina” of Pinot, who has been making Pinot Noir in Santa Barbara County since 1984, and who has blazed a path for other Czarinas in a world dominated by Czars. It was a marvel to see them all together, to be allowed a small peek inside an ecosystem I love and am also a stranger to. To be surrounded by people who know exactly who they are, and why they are here, and who in this case are here to live in conversation with the dirt and the sky.

I got to hear Louis tell his story of finding the place in 1970 and planting it and all the small dramas that accompanied them in the early years. I got to hear Lane ask him questions, hungry for knowledge about her own “heritage”. She wants to know how long it took before Louis realized that Cabernet and Merlot weren’t a good idea and he answers, “It’s my fault, you know I used to deny it, but I can also say that in 1984, Tepusquet made a fabulous Cabernet!” We hear stories of lawsuits and blown harvests. In one case Louis says, “There was one year, I had 7,000, 8,000 tons of grapes and I had no buyers. That’s when I learned the wine business.”

They talk about how hard the business is, and why they keep going. Louis says, “In this business, I don’t have to tell you what the challenge is. Every day, every day every vintage, trying new things.”

“It’s a disease of some sort.”

We drink a 2019 Lumen Julia’s Vineyard Pinot Noir that is already completely gorgeous and Will and Lane want to tell me what makes these wines distinctive. Will jumps in: “It’s a challenging vineyard. I still can’t figure out what the stink comes from but I think it’s reduction. It’s always super reduced every time we make it no matter how much oxygen we try and get into it.” Lane says, “I’ve never found one other vineyard like that. It’s gotta be site specific and it makes beautiful wine but—”

“You’re just fighting reduction. In the winery you’re always like, ‘Is this going to taste any good?’ You stick your nose in the barrel after four months and it’s like, UGH [he grimaces]. I mean this was really bad, this 2019, but once it was bottled, it was great…I’ve had a lot of Julia’s from the 90’s, library wines of Lane’s. I would say that and Sanford and Benedict were the best. They were the most interesting after twenty plus years of bottle age.”

We head out to the vineyard. I’ve been up to Riverbench before, I’ve been to Sierra Madre, but I’ve never been to Tepusquet/Cambria. I didn’t know what to expect. Based on the wine we just shared, and the mysterious funk they’ve described, I couldn’t wait to get in the dirt.

The area is beautiful, in that rugged, windswept way so common of the Southern California wine regions. It isn’t lush. If it inspires poetry, well, it’d be more Sam Shepard than Walt Whitman. Frankly, as we turned down the gravel road into the Julia’s block, I was underwhelmed. I came here to be moved, I came here to be shaken by the power of legendary California roots. But as at the house, I quickly found myself moved less by the surroundings than by their inhabitants. While Lane and Will currently produce a Julia’s Vineyard designate under the Lumen label, and are there regularly, this was Louis’ first time returning in thirty-four years.

When I pulled up, Will, Lane, and Louis were already in the vines, touching, smelling, debating, admiring. Lane encourages me to smell the fresh buds of Pinot Noir, just giving off the tiniest hint of the perfume to come. Clearly she is intoxicated. And Louis is proud. One of the vineyard crew drives up to see who the hell we are and what we’re doing there; but when he sees Louis, he smiles and comes over to talk. After 34 years, he still recognizes the Croatian table grape grower. I try to get philosophical. I ask them, do old vines matter? Are they better than the young? Louis and Lane almost simultaneously say, “Healthy vines are the most important thing.” Lane tells me she wishes I could see it in full bloom.

“It may be the most unique vineyard I’ve ever even seen. It’s because the vines are so tall, they literally canopy almost over your head. They keep it perfect for Pinot, but it’s almost like an umbrella, an umbrella of green, so beautiful and so calming. There’s something magic there…You know if you’re living in the coastal desert, we don’t have a huge amount of greenery that’s natural, so around here just being canopied and green just speaks to your soul.” After more farmer talk, they depart.

I hung behind for a private minute with the vines. I wanted to feel what Lane feels. I place my hand on the massive trunk. It is 51 years old. I remember when my father was 51 years old and I could hang off of his arms or hop on his back. There is a comfort and a safety in holding an old vine in the peak of middle age. Strong enough to support you and wise enough to know how.

The truth is, California isn’t about old vines. At least, not the way Spain is, or Australia. As Lane put it to me later, as much as she loves Julia’s, “In America we like healthy young things…We don’t have anything that is so sacred that we aren’t willing to rip it up and replant it if it isn’t producing what we need.” But we do have a sacred inheritance, in our people, in the trailblazers.

I wonder if Lane knows that she is an old vine, she and Louis Lucas, and the ones who brought them up: Tchelistcheff, and Louis Martini, and Robert Mondavi. And you can see in Will Henry’s eye such a pure gleam of admiration for Lane, and for Louis, and I know Will is going to pass that on. Their knowledge, their love, their tall tales. He has helped to pass it to me now. American wine, California wine, Santa Maria Valley wine isn’t very old, and our vines aren’t going to win that contest; but the people who love them are full of the same vigor, the same fractures, the same desire to grow up, and grow down, and I am honored to know them. 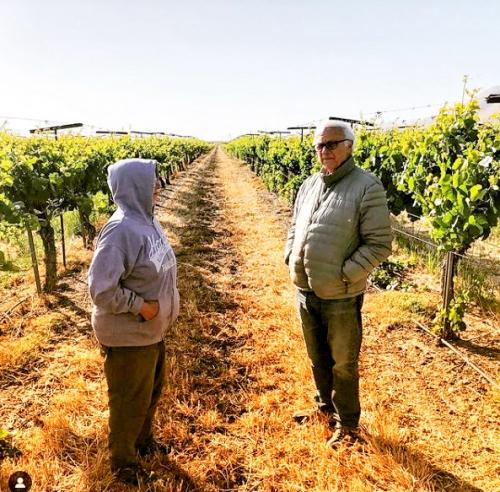