Well, today we had the Blessing of the Grapes. We should have had it last week when we really needed it! Father John did a good job spreading holy water on a bin of Sauvignon Blanc from Valley View. As always, I have to talk about the weather. In the past week, we’ve had record heat followed by a small rain - just about everything we don’t want. But the vineyard handled the situation better than I thought it would. The trellis systems and canopies did a good job of protecting the vines. And we’re going to live to pick another day! We have completed picking Gewurztraminer, Orange Muscat, Viognier, and Pinot Grigio. We’re going to work on Sauvignon Blanc and Pinot Noir. The winery was almost empty a few weeks ago and now it’s time to fill the tanks and barrels.

2016 Chardonnay, Goodchild Vineyard: Our traditional barrel fermented Goodchild Chardonnay. This wine turned out to be very good but had some challenges. We have been transitioning part of the vineyard into organic and it has caused us problems with the grapes, namely in controlling mildew with the use of sulphur for mildew control and adjusting to several very hot days. These particular grapes were made into wine by four different wineries, including us. Two had very good results and could handle the situation. The other two had issues. This is one of the nice ones and is a good example of Santa Maria Chardonnay with just the right amount of oak, not so much that it covers up the flavors of the grape.

2013 Cabernet Sauvignon, Cote del Sol: 2013 was full of surprises. The grapes were good and the wines were better. This has become one of our most award winning wines ever with 92 points in Wine Enthusiast, Double Gold at the International in San Francisco, Gold at the Central Coast Wine Competition, and a high score at Sante. In addition to all of this, it was selected by Notre Dame University to be one of their wines for their 175th Anniversary as part of the Notre Dame family of wines. We have now been selected two years in a row.

I’ve always remarked that 8% Syrah can do some great things to 92% Cabernet, especially if co-fermented. We have been making this wine since 2000. I’m sure glad it’s the wine that’s getting old and not me! Sales in the Tasting Room and, believe it or not, in the marketplace are stronger than ever. In the past few years we have improved our selection of oak barrels for this wine. This one is a keeper. It drinks very well today. With time, it will be a classic.

Harvest rules the roost for the next few months but we’ll be taking some time out to party. Join us on  September 30th to celebrate the 15th Anniversary of the Lucas & Lewellen Tasting Room and later that evening at the Coach House in Santa Ynez for our Harvest Festival Winemaker Dinner. 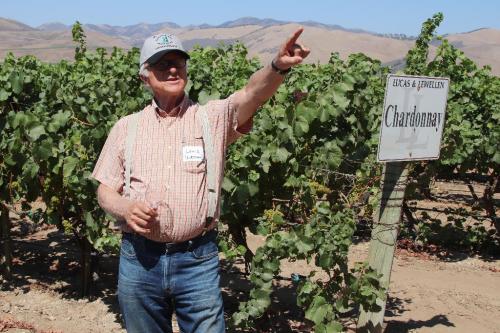