Yesterday I was driving around the vineyards - spring has sprung. Pinot Grigio and Nebbiolo vines have at least 6-8 inches of growth already and the rest of the varieties are not far behind. We had a wet winter and with spring comes wind, sun, and a remote chance of frost. A few nights ago, I had a 34.6°F reading in a couple of our vineyards. Once pruning is finished, we will move to vineyard clean-up mode and remove grass under the vines, disc every other row, and apply the first sprays for the prevention of mildew. Early in the season we use a mixture of copper and sulphur known worldwide as the “Bordeaux Mix” to prevent mildew from starting. Most grapes are susceptible and require spraying every two weeks, especially early in the season because of new growth.

My first observation of the crop is that we do have an ample supply of grapes, not too many but we’re not in short supply either. The next time of most concern is when grapes begin to flower and there we’re hopeful for some warm days and plentiful sun.

2014 Pinot Grigio: Pinot Grigio is probably is the most widely known Italian white wine, promoted mostly in the United States by the Santa Margherita Italian version. It has become the second most popular white wine variety in the west after Chardonnay. Ours is grown at I barely survived the cruise. Not really. We had beautiful weather. We were traveling with a wonderful group of people. The AMAWaterways crew treated us all very well and Lucas & Lewellen wines were a hit with everybody. The French wine made us look really good! Grapes in the Rhone were a little further advanced than normal. I got sick on the second half of the trip so I have a bad opinion of Provence. 75% of the wines in Provence are rosé and they use a lot of different grapes, especially grenache, the least favorite grape of my grandfather and me. Since the trip, Europe has suffered one of its most devastating frost seasons in years. It’s a helpless feeling to have your vineyard engulfed by cold without being able to save it. I feel for them. We had two small frosts back at home while I was gone but Dan and the vineyard guys ran water for two nights and saved the day. Right now in the field, we are busy removing unwanted shoots, starting to hedge, spraying for mildew control, cultivating the middles, and the vines are in the latter part of fruit set, which means flowering is almost over.

Sole Bianco: This one is designed to be most enjoyable at a reasonable price. Made from a blend of several white wines. It’s a bit mysterious, kissed by some orange muscat and given a small dose of late harvest viognier. Refreshing and goes well with most American food. Our answer to Riunite on ice! (Did I really just say that?)

2014 Ramato: This one has become one of our more popular wines at the Toccata Tasting Room. It has something extra that normal Pinot Grigio doesn’t express. With a little bit of skin contact, not only is color added to this wine but some of the flavors which are only expressed in the skins. It’s really a Pinot Grigio rosé. The past couple of years, the rosé part of the wine market has been the most active. Rosés are no longer just summer wines but they’re made bigger and better by introducing more varieties than just the few that were used in the past. This one has a place in an Italian wine lineup. It’s surprisingly good and well worth trying. Enjoy with spring salads and light sauce pastas.

2013 Sangiovese: It has become the leader of the pack of Italian red wines. At times it seems to be a little bit light but the lushness makes it good. True Sangiovese, without alterations, should have a little terracotta red color and should not be tannic. Fruits like plum and cherry sometimes show in this wine. Our Sangiovese vineyard was planted to the Brunello clone which is considered by many to be the best. It also likes the cool climate of our Los Alamos Vineyard. If it has red sauce, it should be your wine choice.

What a quick sellout with the Toccata Sparkling Wine! The next one in the making is made from Pinot Grigio with a nip of Dolcetto for a little color and a splash of Malvasia for floral aromas. The Moscato di Arancia is a first cousin to Moscato di Santa Barbara, only made with Orange Muscat grapes instead of Muscat Canelli. Low in alcohol and high in flavor with a little bit of frizzante.

Remember the Vineyard Tour on August 5th. The way these grapes are growing, they might almost be ripe by then! Get ready for summer.

We are embarking with our Wine Club on our Rhone River Cruise starting in Leon and working our way down to Avignon. Jill and I will spend another 5 days in Provence, the land of great rosés and food.Looking forward to the task! Hope to see you all at the Vintners Festival later this month. 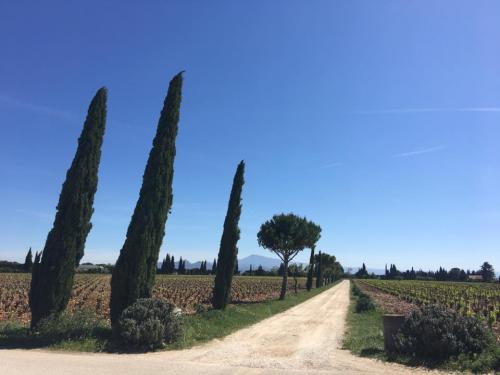