A belated Happy New Year! Having farmer mentality, I would like to start with the weather report. The saying “When it rains, it pours!” describes winter so far. We have already reached thirteen inches of rain, which is our yearly average for most of our vineyards. Our vines are in good position with plenty of water in the soil, which means we won’t have to irrigate until June and we will be finished by late July. In the meantime, we would love to see a little more rain because we are at the saturation point, which means the next rain would provide us with some much needed runoff and help fill reservoirs and water tables. We are almost midway in the pruning season. It started on the 10th of December and we should end around the first week of March. It takes 30 experienced pruners to get the job done.

In the winery, we are busy bottling wines mostly from the 2014 vintage with a couple of wines from 2016, primarily Rosé and Gewurztraminer. At first impression, the wines from the 2016 vintage year look really good, reminding me of the 2012 vintage when almost all grapes were picked at the peak of perfection. The crop was plentiful and, as a result, we have plenty of wine to work with. It has taken the Dirtman 40 years to have enough patience.

2014 Malvasia Bianca: This variety is the gift from the Greeks and the Croatians. Malvasia continues to be one of our best selling wines at Toccata. Very few growers plant this variety. I look at it as a first cousin to Muscat because of its flavor and floral characteristics. We seem to have settled at 1.7 residual sugar. Over the years we’ve tried different levels but at this level, we get just enough sweetness but not too much. Even when made dry like our Secco, Malvasia tastes sweet because of the floral peach and apricot flavors. I always remember a winemaker dinner in Fullerton where the Chef paired it with scampi that was to the hot side, and it was great.

2011 Nebbiolo: Probably the best Nebbiolo that we’ve made over the years. We thought enough of it to reserve some in the library because this is a variety with lots of tannin and it takes a great deal of time for these wines to mature. It always interests me that Nebbiolo, not having a great deal of color, has a greater amount of tannins than most grapes. Recently I poured this at a Nebbiolo gathering at the University of California at Davis where it was very well received. Guests commented that it tastes like it actually came from Italy! This one is 100% Nebbiolo and that salmon cast of color is natural for the variety. Nebbiolo is to Italy what Cabernet Sauvignon is to France. In the marketplace, it would be called Barolo or Barbaresco. This one was made for Italian food.

2012 Nebbiolo Barbera: This one’s on us. I consider 2012 to be one of the best years of my 46 years. This wine was an easy selection for me. The other wines I tasted were good but this one was at another level. The 1/3 Barbera softens the edgy tannins of 2/3 Nebbiolo and the result is a smooth, rich, classic blend of Piemonte. We are using more oak with our wines that contain Barbera which seems to accentuate the richness of the variety. You will also notice the change in color compared to the 11 Nebbiolo. It’s more purple. Both of these wines are drinking at their best. Get out the pasta.

Hope your Valentines Day was close to your heart ♥. I am headed for another cruise soon, this time through the Rhone. I’m tasting through our Syrahs and Viognier and looking forward to comparing them with wines from France, Australia, and California. Hope you enjoyed the Sparkling Rosato you received in December. It has become everybody’s favorite. Buy now, wait later! 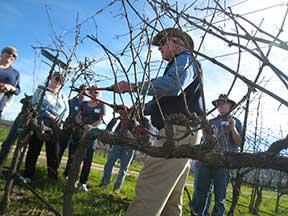